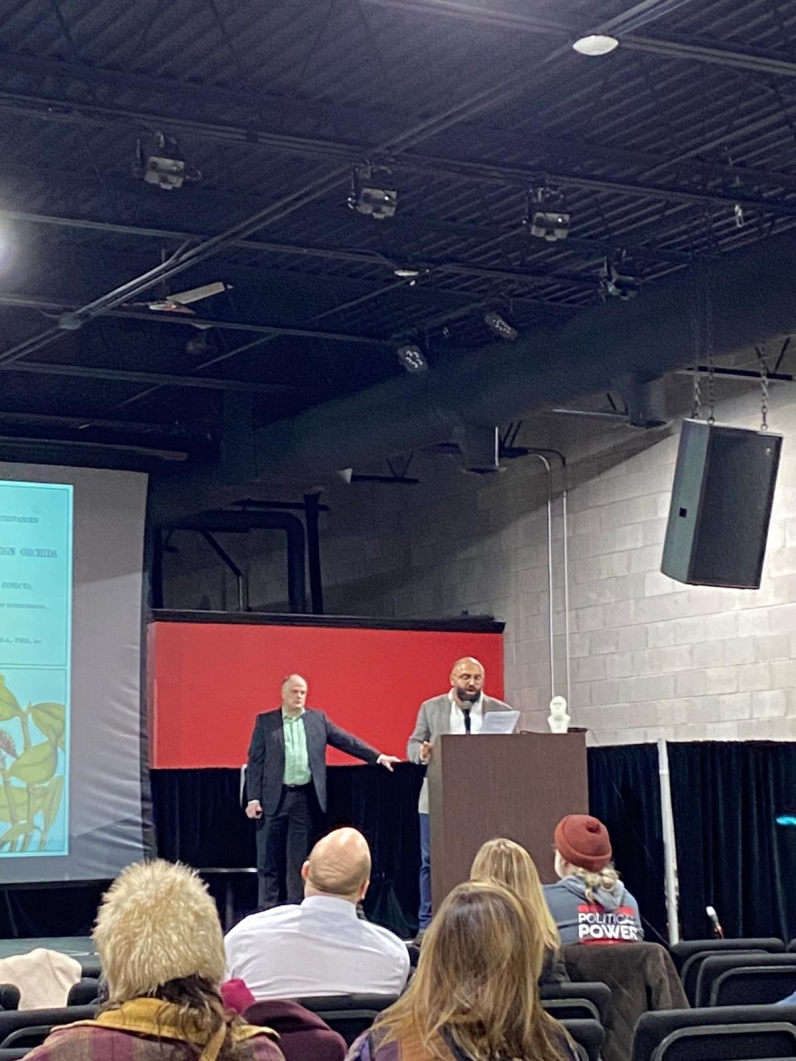 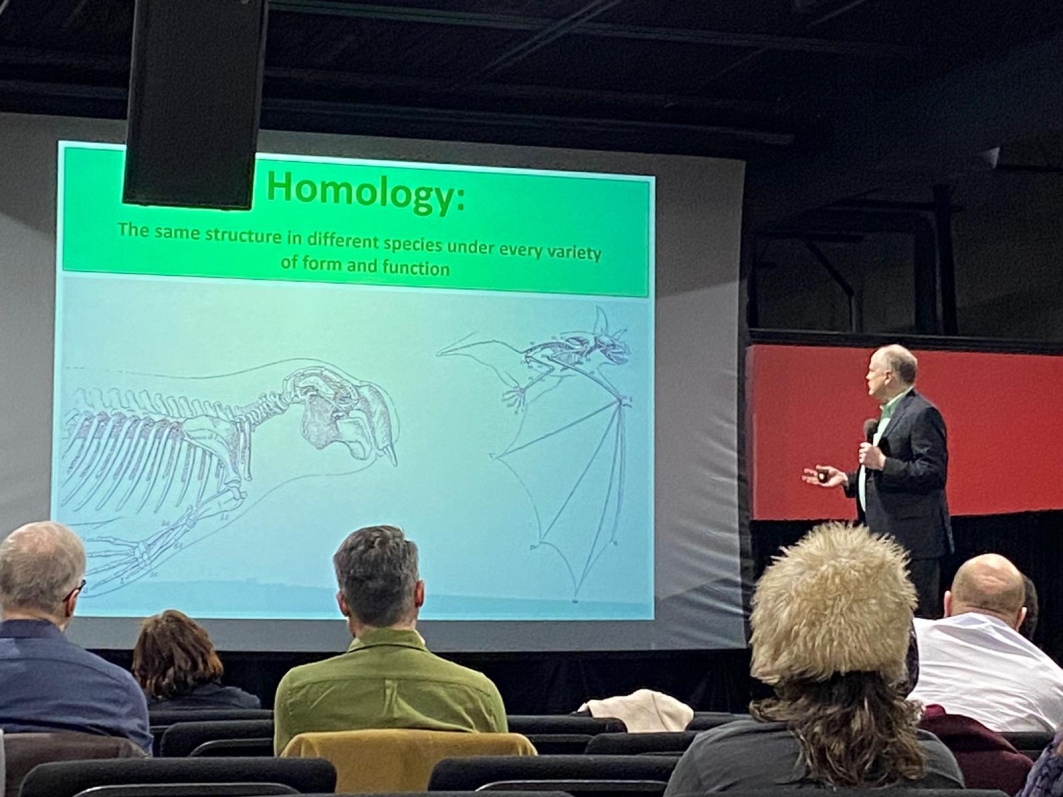 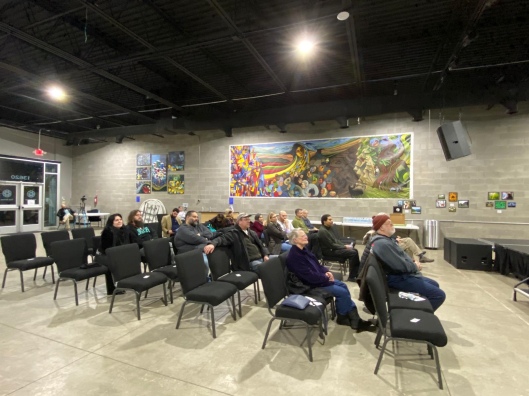 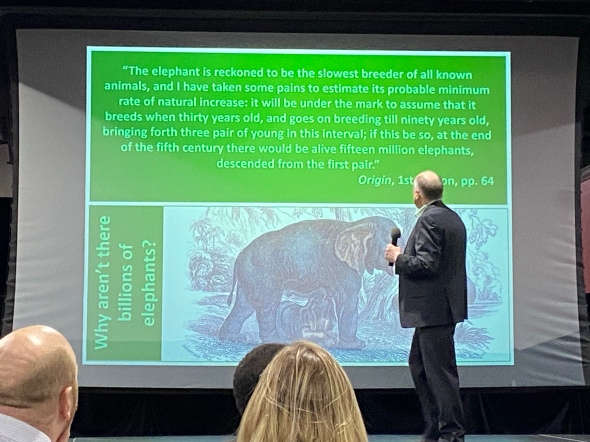 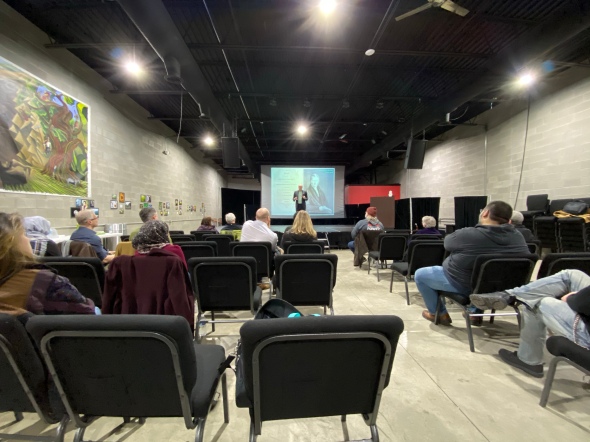 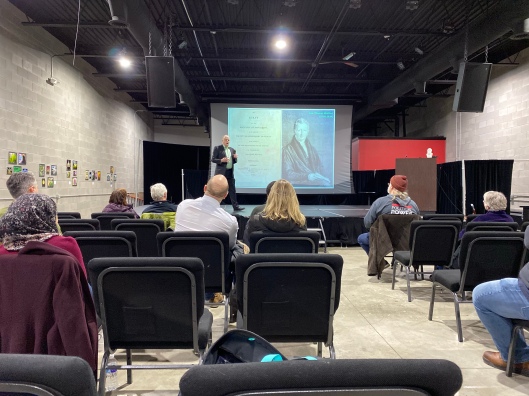 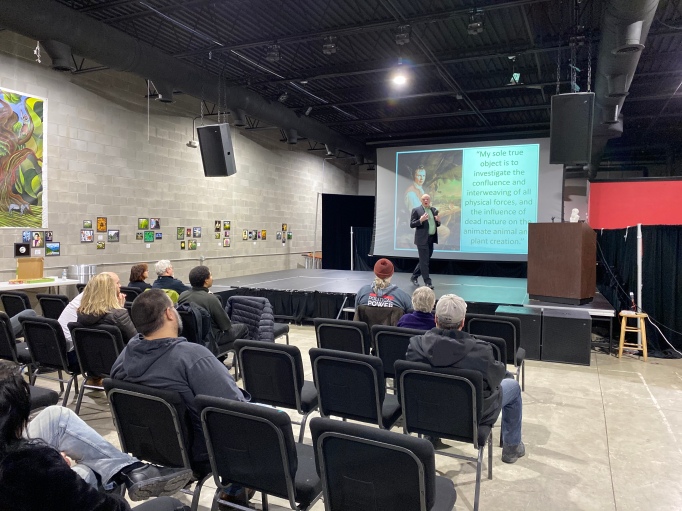 Center for Inquiry is CFI Michigan is a local branch of Center for Inquiry, an international, nonpartisan, nonprofit 501©(3) organization whose mission statement is to foster a secular society based on reason, science, freedom of inquiry, and humanist values.  CFI encourages evidence-based inquiry into science, pseudoscience, medicine and health, religion, ethics, secularism, and society. The Center for Inquiry is not affiliated with, nor does it promote, any political party or political ideology.

CFI Michigan is working to develop a secular community across the state where like-minded individuals can meet and share experiences. We host nearly 200 educational and social events each year. Event topics include: science, religion, philosophy, social issues, politics, evolution, morality and ethics, psychology, secularism, atheism, humanism, agnosticism, skepticism, and others.

We also have an active Secular Service Program to provide CFI members with opportunities to put CFI’s mission into action for the common good through community service and outreach.

Nearly all of our events are open to the public. You do not have to be a member to attend.

Muslimish Detroit is part of Muslimish which is a 501c3 nonprofit organization whose mission is to create a safe, supportive, and open-minded environment for the exchange of thoughts and ideas among current and former Muslims; to foster a pluralistic society that respects the rights of all individuals to live according to their conscience; and to abolish blasphemy and apostasy laws across the globe.

Muslimish was established in 2013 in New York City, and now functions in 12 chapters in North America.

If you value our mission statement, we encourage you to become a CFI Member and/or a Muslimish member, as we rely on the generous support of our members to sustain our programs.

The abstract of the lecture is the following:

“We can dimly foresee,” Charles Darwin promised in the Origin of Species (1859), “that there will be a considerable revolution in natural history” when his scientific colleagues accepted evolution. He was not envisioning a revolution in religion or in philosophy but, rather, in the explanation for patterns observed in the natural world. His overriding goal was to unite the jumbled facts of natural history under general law. Darwin’s “considerable revolution” did change the way we see the universe. But it originated in the unquenchable curiosity a working scientist felt about fossils and flowering plants and femurs and island faunas.

Richard Bellon teaches history of science and science policy at Michigan State University. He has written extensively on the connection between science, politics, and social change in Britain from 1830 to 1870. He is author of A Sincere and Teachable Heart: Self-Denying Virtue in British Intellectual Life, 1736-1859 and his article “Inspiration in the Harness of Daily Labor: Darwin, Botany, and the Triumph of Evolution, 1859-1868” received the History of Science Society’s 2013 Derek Price/Rod Webster Prize for excellence in a research article published in the journal Isis. His current research project focuses on the history of American biology from the 1890s to the end of World War II.

Ladies and Gentlement, Brothers and Sisters, Welcome to Darwin Day.

In the beginning, the solar system revolved around the earth, and humanity was carved from clay and bone—plopped, as it were, perfectly formed into a populated garden. Origin stories are, however, meant to be rewritten, and the reformation of central, essential ideas about the nature of things meant and means challenging powerful ideologies and institutions.

As was the case for earlier insights that re-situated our view of our place in the cosmos, the study of naturalism and biology threatened to expose the mutability of the human species and jeopardize a theological stranglehold on scientific discovery. The truth will out, as they say, and as Copernicus struggled to free the truth behind a heliocentric system, so too did Charles Darwin muster an immense intellectual bravery, a perpetual curiosity, and a ravenous hunger for truth in an attempt to understand the origins of modern life.

Breakthroughs in understanding our own origins would require setting aside prevailing cosmological and anthropocentric views; they would necessitate a commitment to the scientific method and the potentially disconcerting facts that may arise from its rigor. Empiricism in the field of biology, and its immense potential benefits to human well-being, had, for centuries, been stymied in order to maintain theological tenets. The fantastic realization behind the interconnectedness of the living world and the biological mechanisms that inform adaptation and survival were hidden behind a dark veil, awaiting discovery.

Darwin’s daring depictions of evolution via genetic variation and natural selection lift the veil revealing what, at the time (and, for some presently), may have been philosophically or ideologically troubling. His innovations are, when seen through the dispassionate lens of scientific data, however, neither inherently good nor bad, merely properly sourced and factual.

The repercussions of these discoveries are wide ranging and awe-inspiring! Darwin’s life and work continuously impact science and humanity. His discovery of natural selection as the mechanism for evolution unclasped scientific progress from theological limitations and paved the way for a fuller understanding of our place in the universe. Without the discovery of natural selection, the greatest achievements in health, philosophy, and human well-being over the past two hundred years would have been impossible.

While Darwin’s remarkable impact on biology, cosmology, and the scientific process generally cannot be understated, it is again his undeniable desire for truth through scientific discovery, his unwavering curiosity to discover that which was hidden (naturally or purposefully), and his determination to brave intellectual depths that inspires us.

Ever since Charles Darwin published his radically insightful book, On the Origin of Species, Darwin has been the focus of commemorations and tributes by scientists, artists, scholars, and freethinkers throughout the world. From the early gatherings after his death at his own Downe House, to bicentennial events all over the globe, celebrating science and humanity within our various cultures internationally has been a resonant and transcendent pursuit.

In 1909, on the 100th anniversary of his birth, large celebrations honoring Darwin’s contributions to science and humanity were held in Cambridge, New York and New Zealand. The University of Chicago commemorated the 100th anniversary of the publication of On the Origin of Species in 1959 with a series of notable events from November 24 through the 28th. The 200th anniversary of Darwin’s birth saw an entire season of BBC programming on Charles Darwin himself as well as evolution and natural selection. Salem State University has successfully held an annual Darwin Festival since 1980.

Today is Darwin Day, the birthday of an extraordinary scientist who asked some bold little questions about the origins of life: Why? How?

So much of what we know about our place in the universe rests on Charles Darwin’s questions and his courage in publishing answers. The importance of questioning cannot be understated. In fact, every new league travelled on the moral arc of justice rests on the contributions of questioners equally brave.

I myself have been influenced so greatly with Charles Darwin.  He may be, or the theory of evolution through Natural Selection, one of the most influential things in my life.

As an engineering student, I had the least exposure to biology, and less exposure to the theory of evolution. Growing first in the middle east, where the theory is pretty much dismissed and discussing it is frowned upon or questioned suspiciously, I heard no mention of it in any science class or anywhere else.

I also was a student of Islamic Studies who dedicated a big portion of his youth studying and teaching Islam’s theology, history, jurisprudence, Quran, and Hadeeth.  The subject of evolution is not present anywhere in Islamic studies naturally. Nevertheless, a discipline that position you supposedly to answer any question from a religious audience does not train you on saying “I don’t know” as much as training you on finding answers from the Quran or tradition.  Hence, when an Imam is asked about the theory of evolution by one of the members of a congregation, the answer that I used to hear is: “Son, this is a theory that has been disproved long time ago and is no longer considered valid”. A mere lie, or a complete false I come to learn later.

What exposed me to the theory of Evolution and cuased me to change my understanding of life all together, was a question in 2008 … that coincided with the discovery of the fossil Lucy.

Lucy is the common name of AL 288-1, or Australo pithecus, which is several hundred pieces of bone fossils representing 40% of the dkeleton of a female of the hominin species Austraplophithecus afarensis discovered in Ethiopia in 1974 and dated to about 3.2 million years ago using the potassium-argon radiometic dating method.  THe fossil assembly and research was completed by 2007, after 33 years of scientific work, including a 13 years suspension of research due to lack of dating technology, and it toured the United States for 6 years.

I was the Chairman of the Institute for Religious Studies, Humanities, and Dialogue then and was asked the question about Lucy.  Could not find the answer within the Islamic resources, and the scholars members of the organization did not have a satisfiying answer. I started a reserach called Islam and Evolution and ended up opening pandora’s box.

Once I understood Evolution, the Empirical Argument from beauty fell,  Argument from design fell, the way I see the world, now with scientific lense has changed, a beautiful lense, a fore more wonderful place … as Richard Dawkins says in the Unweaving the Rainbow:

“I believe that an orderly universe, one indifferent to human preoccupations, in which everything has an explanation even if we still have a long way to go before we find it, is a more beautiful, more wonderful place than a universe tricked out with capricious, ad hoc magic.”

I would like to start the program by the following invocation read to us by one of Muslimish Detroit Organizers, Ferdaws A

On Darwin’s birthday, let us find ourselves inspired to stretch our minds with questions that test our limits.

Let us champion the values of intellectual bravery, perpetual curiosity, and hunger for truth.

Let us honor scientific thinkers like Darwin not just in our laboratories, but in the practice of nurturing compassionate, egalitarian communities that value free inquiry.

Let us work to grow our understanding of the interconnectedness of all life, and expand our empathy and the reach of our compassion.

And, like Darwin himself, let us take daring risks for a freer, fairer, more joyful world.

Without further due, I would like to present to you Dr. Richard to speak for 45min followed by a Question and Answer session.  Dr. Richard welcome to the podium.