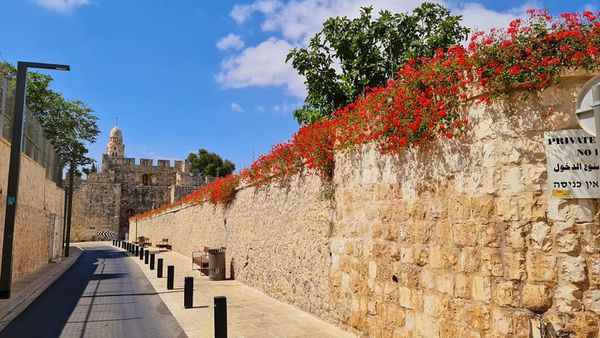 Residents of Sheikh Jarrah’s resistance to eviction by Israeli Jews evolved into a military confrontation so lopsided, the Israeli bombardments against Gaza so terrifying, it drew widespread condemnation (the US government excepted).

The Palestinian dead, injured and homeless are still being tabulated, while eviction processes of Sheikh Jarrah’s Arab inhabitants continue, even as we learn of similar forced displacement of Arabs in nearby Silwan.

Another Israeli scheme to dislodge Palestinians is home demolition—they number in the many thousands and continue (in Bustan, Silwan) even as I write. For a glimpse of these all-too-routine violations, I append my (newly digitized) April 5, 1996 Christian Science Monitor article based on what I witnessed — I likened it to a lynching – when on assignment in the West Bank 25 years ago.

“It’s quite a spectacle, a Palestinian home being blown apart. Furniture, dishes and clothes, hastily removed, are deposited helter-skelter in the path or road.

Americans rarely see Israel’s demolition policy at work; but it’s a regular form of punishment. All Palestinians, from toddlers to the elderly, are familiar with it. Perhaps it’s happened to a neighbor. Perhaps they themselves were hauled out of their house in the early morning and told by a soft-spoken Israeli officer, with his troops surrounding the residence, that he has his orders. The entire town is aroused. Neighbors join in the frantic rush to save some household items; they know it’s useless to protest.

The silent frenzy of losing a home this way has no parallel. It’s not like a flood or a fire; it’s more like a lynching. There’s no one to call for help. Hundreds of soldiers surround the house and village to ensure no one interferes with the bulldozers and dynamite teams.

It’s all done legally too. That is to say, a paper, written in Hebrew, is presented to the householder spelling out the order to blow up or bulldoze his or her home, or to seal it. Often the order charges that the house lacks a building permit. Typically, a family has two hours’ notice.

In a village near Hebron in 1991, I saw the remains of a mosque that was flattened weeks before. The land had been cleared because of some building infraction, neighbors told me.

At other times, particularly during the intifadah (uprising), a family is informed that their son was caught (not convicted but simply picked up and charged) throwing a Molotov cocktail, or that he was captured in an attack on an Israeli.

In some cases, only the family orchard (their livelihood) is leveled. Again, the family is notified when the machines are already on the nearby road. Orchards have been destroyed based simply on a report that some Palestinian children were hiding from soldiers among the trees, or Jewish settlers claim that someone they were pursuing was heading in that direction.

During the first three years of the intifadah (1987-1991), when communal punishment was the norm for civil disobedience, the Palestinian Human Rights information Center recorded 1,726 demolitions or sealings of homes. On average, there are nine Palestinians living in a home; so those lost houses represent about 15,000 men, women and children, forcibly made homeless during that time. Often the dwelling is not even the family’s original home but a shelter inside a crowded refugee camp built with the help of United Nations funding.

Israel says it demolishes certain houses because they’re the homes of “suicide bombers”. The news media, which remains silent about these actions, are effectively sanctioning the policy. So conditioned is the public that whatever is done to an “Islamist terrorist” seems justified and is endorsed. Are we right to stand by silently and accept that?

Consider this: The demolitions are retaliatory actions that strike deep into the core of Palestinian identity. They are bound to have some traumatic effect on children. Such devastation may quell opposition temporarily, but the long-term effects may be very different. People may become more embittered and hostile towards Israeli authority. Blowing up the home of a family may in fact move the brothers and sisters of a dead man into closer identification with his actions.

Israel does not respond in this manner to all heinous acts. Look at the assassination of Prime Minister Yitzhak Rabin by the Israeli law student. Look at Baruch Goldstein, the Hebron mass murderer. Their actions repelled most Israelis, yet their homes and families remained unharmed. No, these destructive acts are specifically designed for and executed against Palestinians.

Palestinians see this type of punishment as another method Israel uses to “clear the land”, to deny their existence, to implement its “cleansing” policy. People deprived of a home may have one less link with the land. But such actions have other consequences. Children witness their homes, the places they were born, blown apart. They watch fathers and other male relatives helplessly held at gunpoint. They imbibe the horrified reaction of their mothers and grandmothers.

The house as the center

Because this form of punishment is so rare, few can imagine the impact of a house being blown up in front of its owners. We have to understand how central the house is to Palestinian life. Even today, most Palestinians are born at home. This is the place for daily prayer, for family meals, for weddings, for homecomings from jail, and for funerals. This is where everyone gathers to pass the evening. It is not a shelter; it is a community. It is the place for consolation and joy, the haven and the refuge.

Mother is the manager, so the home is unequivocally associated with her power and protective role. Harming the house is like violating the mother. Many children will feel they must avenge this injustice. Especially with the world community standing by seeming to sanction the destruction, family members may feel more responsibility to seek justice. Anyone who understands this would advise Israel to cease this practice for these reasons, if not for moral ones.”

Attached photos are from Lisa Majaj’s recent posting. (Graphic documentation of these crimes are all too abundant as you will see in linked articles)