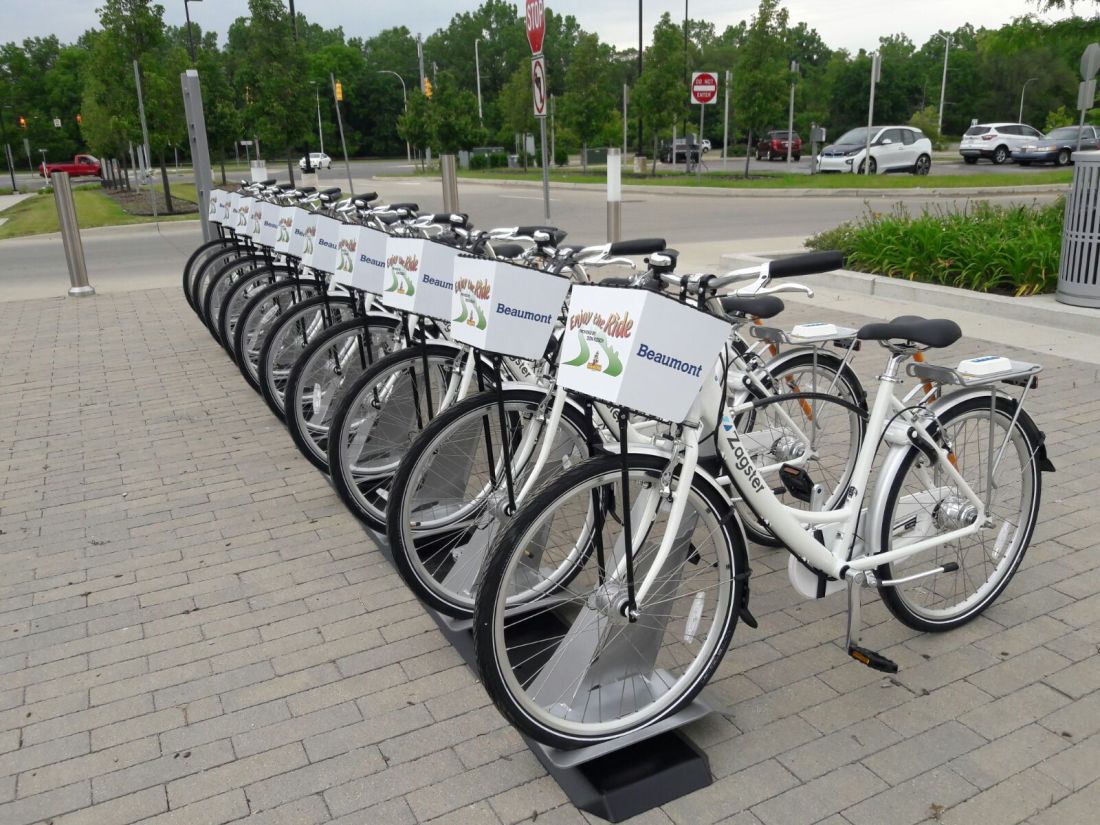 Last week, as I was on my way to catch an Amtrak train to Ann Arbor, I noticed something peculiar at the Dingell Transit Center in Dearborn. Lined up in front of the train station was a row of Zagster bikes, similar to the ones used by quicken loans employees in Downtown Detroit. It seemed strange since I had never heard of bike share in Dearborn, so I took a photo and brushed it off assuming it may have been a small pilot project for the train station. That night however, I started receiving messages from my friends at the Arab American Museum, and also found several posts online that bike share was coming to Dearborn! A few days later, the city officially launched its Zagster Bike Share along Michigan Avenue, linking East and West Downtown Dearborn. The initiative, sponsored by the Kosch Family, Beaumont Health System, and the City of Dearborn, provides a new mobility option for residents along the corridor, promoting a healthy and sustainable way of getting around. The system comprises of 10 stations with a total of 50 bikes, positioned along Michigan Avenue on both ends of town. Users can register for an annual pass on the Zagster app for $20 and get a $10 discount by entering the promo code “bikedearborn.”

Checking out a bike with Zagster is as simple as choosing a station on the Zagster App, selecting the number of the bicycle you would like to withdraw, and pressing “unlock” on your phone.  The bike is then released from the dock via Bluetooth. There also SMS options to unlock a bike for those without smartphones. Once a bike is unlocked, the app begins timing your rental, which is free with the membership for the first 2 hours, and adds a $2 dollar charge for every additional hour. Dearborn’s Zagster bike share system has a longer free period than other bike share systems, like Detroit’s recently launched MOGO Bike share, Divvy in Chicago, and Citibike in New York. With these systems you have a free 30 minute period after buying a day pass or annual membership, and for longer rides you must dock and check out another bike or be charged an additional fee. The longer period works well with Dearborn’s system as it gives riders the opportunity to go further from the dock where there are not currently any stations, and return within the 2 hour period. For example, you could potentially ride from old city hall to downtown Detroit, have some time to grab lunch, and ride back without being charged for additional time. The bikes come with built-in Locks for making stops along your trip.

Bike share in Dearborn will be critical to encouraging residents to think differently about mobility in the city. For those who haven’t been on a bicycle in years or just don’t have one, it gives them the chance to explore it both recreationally or as a potential mode of transportation. I think this is particularly important in Dearborn because so many of our trips are within a short cycling distance, but the mode remains underutilized. In addition to getting residents excited about cycling and building a base of ridership in the city, it also provides the added convenience of not having to transport your bike to bicycle in the city. More people riding bicycles in Dearborn could decrease traffic and parking pressures in the growing downtown hubs, and easing this pressure would be good for Dearborn from an economic development standpoint. As new mobility options become increasingly attractive around Metro Detroit, it is very important for Dearborn to remain competitive in providing innovative and efficient transportation services. Dearborn bike share is an excellent step in that Direction.

Importantly, bike share is considered a form of public transportation, and creates new connections to existing transportation services. Bike share can also help resolve the first/last mile problem, where getting to a transit route from your home, or getting to the destination once off the bus or train, users have to walk a distance. Currently Michigan Avenue bus service is divided at Fairlane transit center, with the suburban system SMART running west of Fairlane, and DDOT running East through Dearborn to downtown. Having to transfer between these two systems right in the middle of Dearborn makes it incredibly inefficient to travel from East Dearborn to West Dearborn with transit. Bike share can help to expedite that process by delivering transit riders from their route to a bike station nearest to the destination. Rather than pull into Fairlane, riders could stop at the nearest bike station, and take a bike to their destination.

As exciting as the launch of Dearborn bike share is, there are still some obvious gaps that the city and the program organizers need to take into account as the system continues to develop. First and foremost, the state of cycling infrastructure and road safety in Dearborn is unimpressive. The city has no bike lanes, and many roads (including Michigan Avenue where the bike share is located) are 8-lane state highways where pedestrians, cyclists, and transit users take a back seat. In addition to the design of these streets not being conducive to cycling, the sidewalks – a piece of infrastructure not intended for cyclists but often a necessary alternative – are not always continuous. Some Dearborn roads like Schaefer and Warren would benefit from a so-called “road diet” that would reduce the width of lanes and change the layout of the street to calm traffic and create safer facilities for cyclists and pedestrians – often without negatively impacting congestion. The City of Detroit under planning director Maurice Cox has implemented a number of what they refer to as the “gold standard” of bicycle infrastructure – protected bike lanes built between the sidewalk and a buffered lane of on-street parking to create a safer comfortable space for cyclists. As the City of Detroit begins to implement this infrastructure along Michigan Avenue and Warren Avenue, it would make sense for Dearborn to implement similar styles of infrastructure to encourage riders to view cycling as a safe reliable option of getting around and build on the momentum of cycling initiatives in Detroit.

Another important improvement to the system is the layout of the stations. Currently, all of the stations are along Michigan Avenue, which is appropriate considering the downtown districts and the desire to connect the two as a single entity. However, most of the residential density where transit and bike share initiatives tend to work best is in East Dearborn. Currently, East Dearborn only has three bike share stations, all of which are essentially centered in the old city hall area. Other parts of town would benefit from bike share stations, especially the Warren Avenue corridor, which has the greatest density of residents and a high level of retail and restaurant businesses. Bike share stations along this portion of East Dearborn would make an excellent connection with the Michigan Avenue bike share stations, and be a major improvement for these residents to accessing the system. While people with quick access to the Michigan Avenue stations can get to warren, the reverse is not true as resident’s along warren are not likely to walk to Michigan Avenue to check out a bike. Rather than bunching the stations near Michigan and Schaefer, it would make sense to have at least one near Warren and Schaefer, or perhaps add some to the warren corridor if the system plans on growing in the future.

All that being said, it’s good to see the city take this first step forward to integrating cycling into its transportation vision. My first ride on the bikes was simple, comfortable, and efficient and I look forward to riding agian soon. It will be interesting to see how residents respond to the new system and the impact that it has on cycling in Dearborn and the region as a whole.

View all posts by Idrees Mutahr