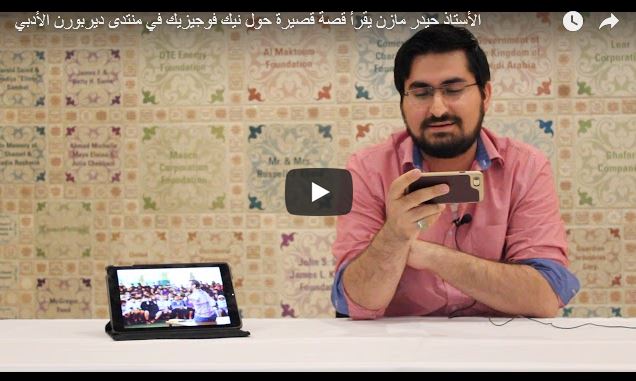 No arms, no legs – no worries! Nick Vujicic uses his story to inspire and inform people all around the world.

Nick is an Australian Christian evangelist and motivational speaker born with tetra-amelia syndrome,[4] a rare disorder characterized by the absence of arms and legs. He is one of the seven known surviving individuals planet-wide who live with the syndrome.

Mr. Haidar Mazen is an academic educator, translator, and journalist. He serves as the director of Conceptual Art Media, a visual production house based in Michigan. In addition, he is a language consultant and has been an active volunteer in various educational, visual, writing, and translation projects. He holds a master’s degree in Education and a bachelor’s degree in English Language and Literature from the University of Texas at Arlington.

He presented in the Dearborn Open Mic a short story describing the video above.  The poetic writing of Haidar Mazen brought tears to the eyes of the listeners and took the video into a new dimension.  Listen to it here if you understand Arabic: (The text in arabic النص باللغة العربية)