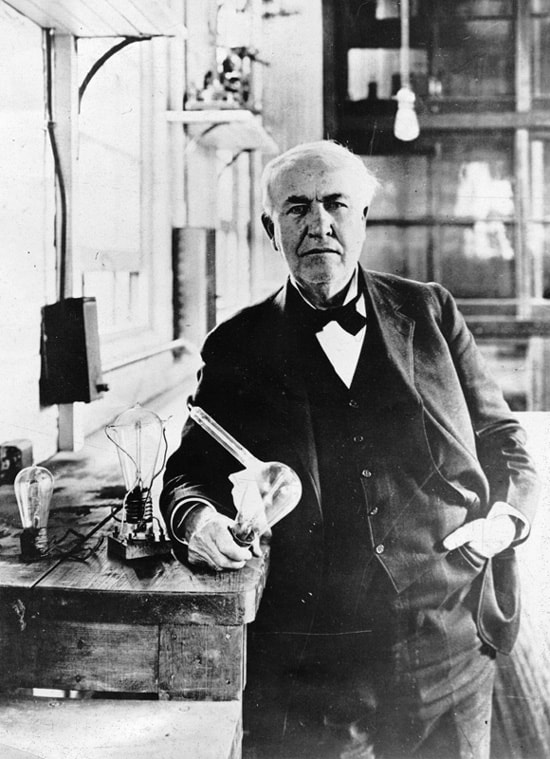 I recently finished Edmund Morris’s epic new Thomas Edison biography. It took me a while to get used to his reverse chronology structure (he works backwards from Edison’s later years to his earlier years), but once I did, I found it riveting.

One thing that caught my attention from the book was the degree to which early 20th century Americans were exposed to rapid technological change. We think the arrival of the internet and smartphones were a big deal, but these innovations were trivial in magnitude compared to the arrival of electricity.

Constraints that had been constant throughout all of human history — the darkness of night, the slow pace of information dissemination — were obliterated in just a few decades.

Edison was born in an age of horses and sailing ships. He death was broadcast worldwide via radio waves, and whole cities — their streets clogged with cars and their skies blotted with steel-girded buildings — temporarily powered down their ubiquitous electric lights to honor his passing.

These changes naturally led to some reactionary technophobia (though, as I argued in a recent op-ed for WIRED, there wasn’t as much of this resistance as popular commentators like to imply). I’m interested in this historical moment of technophobia, as skeptical technology commentators such as myself, or Tristan Harris, Jaron Lanier, and Douglas Rushkoff, are sometimes associated with this tradition by our detractors.

But does this analogy hold up?

There are two problems with connecting the types of ideas discussed in books like Digital Minimalism to Edison-era technophobia.

The first is that many of the anti-technology voices from the early 20th century were disturbed in large part because they didn’t understand the new technology (a new phenomenon in a world in which tools had always before been physical and intuitive). Electricity seemed wholly mysterious and borderline occult.

Modern technology skeptics, however, tend to instead be technologists who are thoroughly familiar with new innovations. I trained in MIT’s Theory of Distributed Systems and Network and Mobile Systems groups: it’s hard to tag me as baffled by the operation of a modern social network or broadband wireless internet.

The second problem is the Edison-era technophobes tended to reject the entire program of new electrical technology as bad. The whole movement scared them, and they wanted nothing to do with it.

Modern skeptics such as myself, Lanier, and Rushkoff, by contrast, have been internet-boosters since its earliest days, and still hold semi-utopian visions about how internet technologies can improve the world. It’s hard to tag us as scared of change in a field where we’ve consistently supported positive disruption.

A better analogy from the time of Edison is his own battle against George Westinghouse to determine whether alternating current was superior to direct current for municipal energy generation. No one at the time thought Edison was anti-electricity or scared of change. They instead recognized he was debating what direction was best for this particular technology’s advancement.

This is the generous interpretation I give to my own critiques of social media. I love the internet, but worry that trying to consolidate it under the control of a small number of Orwellian conglomerates is a costly detour, impeding instead of promoting its advancement. Lanier, Rushkoff, Harris would almost certainly say something similar.

This doesn’t mean we’re right (Edison was wrong in his preference for direct current), but it also doesn’t mean that we were somehow duped by an ill-informed moral panic.

To summarize my take away from studying the life and times of Thomas Edison, be wary of confusing technophobia and techno criticism. The former is not as common as we like to think, and the latter has always been absolutely crucial — especially when delivered by fellow technologists — in the quest to unlock more and more human potential.