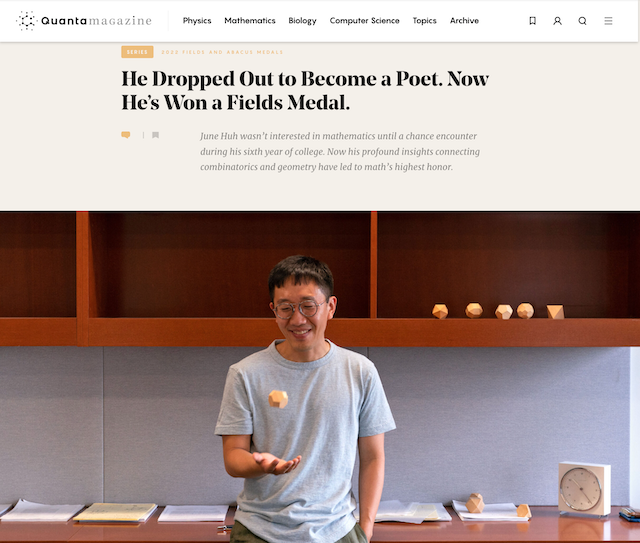 Earlier today, June Huh, a 39-year-old Princeton professor, was awarded the 2022 Fields Medal, one of the highest possible honors in mathematics, for his breakthrough work on geometric combinatorics.

As described in a recent profile of Huh, published in Quanta Magazine (and sent to me by several alert readers), Huh’s path to academic mathematics was meandering. He didn’t get serious about the subject until his final year at Seoul National University, when he enrolled in a class taught by Heisuke Hironaka, a charismatic Japanese mathematician who had himself won a Fields back in 1970.

Given his recent conversion to the mathematical arts, Huh was only accepted at one of the dozen graduate schools to which he applied. It didn’t take long, however, for him to stand out. As a beginning student, Huh managed to solve Read’s conjecture, a long-standing open problem concerning the coefficients of polynomial bounds on the chromatic number of graphs. The University of Michigan, which had previously rejected Huh’s graduate school application, soon recruited him as a transfer student. Along with his collaborators, Huh generalized the approach he innovated to tackle Read’s conjecture to prove similar properties for a much broader class of objects called matroids. The new result stunned the mathematics community. “It’s pretty remarkable that it works,” said Matthew Baker, a respected expert on the topic.

The reason so many readers sent me the Quanta profile of Huh, however, was not because of its descriptions of his mathematical genius, but instead because of the details it shares about how Huh structures his deep efforts:

“On any given day, Huh does about three hours of focused work. He might think about a math problem, or prepare to lecture a classroom of students, or schedule doctor’s appointments for his two sons. ‘Then I’m exhausted,’ he said. ‘Doing something that’s valuable, meaningful, creative’ — or a task that he doesn’t particularly want to do, like scheduling those appointments — ‘takes away a lot of your energy.’”

One of the core principles of my emerging philosophy of slow productivity is that busyness and exhaustion are often unrelated to the task of producing meaningful results. When zoomed in close, three hours of work per day seems painfully, almost artificially slow — an impossibly small amount of time to get things done. Zoom out to the larger scale of years, however, and suddenly June Huh emerges as one of the most, for lack of a better term, productive mathematical minds of his generation.

Wissam, Wesley, or simply W, is an educator, writer, entrepreneur, engineer, activist, ex-Imam, humanist, liberal thinker with interest and mediocre attempt at many takes of life. A modern confused Renaissance man, who uses doubt as a path for emancipation and science as a road towards enlightenment. View all posts by W